Forbes: Airshare Has Big Plans With Small Private Jets And A Unique Approach 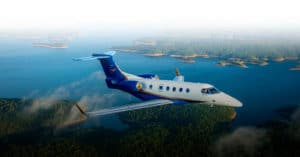 Based in Lenexa outside Kansas City, Airshare is making moves. In September it said it was expanding its customer markets to Chicago, Milwaukee, Indianapolis, Cincinnati and Louisville.

After rebranding itself last year from Executive AirShare and bringing together its aircraft management and fractional and jet card operations, its CFO turned CEO in 18 months has refined the fleet plan and is now looking east.

It already had a base in Buffalo so John Owen says the priority is now to fill in the gaps and start connecting the dots. Expect more announcements. He says both the Northeast U.S. and Southeast U.S. are on his flight plan.

Of course, if you haven’t heard of Airshare, you might have heard of its spokesperson, all-star Chiefs’ quarterback Patrick Mahomes. The company signed Mahomes before he rose to be the league’s MVP last year, and he re-signed with his hometown private jet service this year, perhaps reflecting the same middle of the country values and vibe you get chatting with Owen.

In and industry where big announcements and big talk often dominates, Owen is both low key and focused. Since moving to the corner office, he’s cut the fleet from five types with six cockpits to two, settling on Embraer’s Phenom 300 light jet and its smaller sister, the Phenom 100, a very light jet.

In an industry where it’s sometimes hard to get a straight answer on actual fleet size, Owen simply lets out he has 13 of the bigger birds and 10 of the 100s. As the company grows, he plans to add more of each type. All of the 100s will be WiFi equipped by the end of the first quarter, meaning connectivity across its fleet.

The Phenom 300 has become a favorite in the jet card market with NetJets, Magellan Jets, and Alliance Aviation all adding dedicated cards just this year.

At the same time, very light jets are becoming harder to source on a program basis. JetSuite said it is reducing its Phenom 100s and when Solairus relaunched its jet card program earlier this year it eliminated the VLJ option. Currently, Nicholas Air, OneFlight International and Airstream Jets are the only fixed-rate cards featuring the small aircraft.

Owen however is bullish. But then, Airshare is a bit different to begin with. While it will fly you anywhere you want, it uses a base model. In other words, it targets people live in those base markets to buy shares and jet cards.

Via its managed fleet, it can offer on-demand charter options on everything up to large cabin jets, although each trip is priced separately.

Owen says its pilots live where they are based so customers often see familiar and friendly faces.

However, it’s not really the local touch or the base model that sets Airshare apart. Unlike the typical share and card programs where you buy hours, it uses a days based method. It’s something that Flexjet, the number two player in the share/lease market copied, although so far it’s limited it to its Gulfstream G650 program.

Airshare’s Embark jet card program is based on 10 days per year and its fractional shares and leases start at 20 days. You then pay an hourly rate, but the same plane stays with you during the entire day and unlike other programs there is no segment minimum.

That means a 20-minute flight is billed as 20 minutes plus the industry standard 12 minutes of taxi time. Most programs bill you for at least 60 minutes as soon as you climb aboard even if your actual flight time is less.

Owen says its program works most efficiently if you fly at least two hours on your days. Compared to buying cards or shares by the hour, the by the day approach gives you up to 30% more flight hours, according to Airshare’s website.

Owen says the offerings are particularly popular with owners of franchises, the oil and gas industry and universities where coaches visit as many as five or six location in a single day.

Owen notes that since the same plane and crew stay with you if you get done with a meeting early or your lunch runs late, it’s no problem. You can change your schedule. He says it’s not unusual for customers to add or delete a stop during the day.

Its clients also have a bottom-line ethos. While much of the industry focuses on bigger and longer-range jets, Owen says it’s not unusual for Phenom 300 owners to downgrade to the smaller Phenom 100 if they are traveling with one or two other people.

The streamlined approach also attracts owners of larger cabin aircraft who need the supplemental lift but don’t need as much capacity. Its Phenom 100s are configured to seat four in the cabin or five using the belted lav seat. The 300s hold either seven or eight, all in club seats.

Owen says privately held Airshare also wants to build its fleet of managed aircraft and has added dedicated sales directors for that side of the business.

On its website in a section called Shareowner Stories, Robert Fox, the CEO of Conax Technologies speaking of Airshare says, “We can all fly the biggest planes, but the people are who matter. This is a people-centered business. They’re the ones who make the company great.”