CNBC: Super Bowl champ Patrick Mahomes is on top of the world. Now he’s poised to cash in

On February 20, CNBC’s Jabari Young caught up with Kansas City Chiefs quarterback, Patrick Mahomes, to discuss his legacy and goals around building his brand. Airshare’s Chief Marketing Officer, Andy Tretiak, was on-hand to discuss how our partnership with Patrick is mutually beneficial. Below is an excerpt from the article. 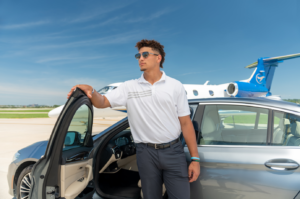 Mahomes’ stock is rising in the marketing world.

While he won’t disclose how much his current endorsement deals are worth, Mahomes is now in a position to start at a higher price point when negotiating his next deals, experts say. Mahomes could also reexamine his existing deals to take advantage of his rise on the field.

“His value as an endorser has gone up significantly in the last two years,” said Scott Rosner, the academic director of the sports management program at Columbia University. “Not only has his value gone up, but he has the ability to position himself in a number of different ways from a branding perspective.”

Rosner said Mahomes’ appeal for elite brands is not only his NFL success but, again, his relatability and charisma.

“He’s got it,” Rosner said. “In many ways, he’s the type of athlete you think of as being directly from central casting as the face of a league.”

And as he transitions to becoming the face of the NFL, Rosner said, Mahomes “will have the kind of leverage in the marketplace, not only from a dollars perspective but from a selectivity perspective, that 99.9% of professional athletes, if not more, can only dream of.”

In addition to his exclusive deal with Oakley, Mahomes partnered with top companies including State Farm, Adidas, and Procter and Gamble. Those deals complement local partnerships with Kansas City businesses such as CommunityAmerica Credit Union and the private jet company Airshare, a deal Mahomes secured in 2018.

As part of the terms with Airshare, Mahomes has access to the company’s private jets whenever he wants to travel. The deal also allows Mahomes’ family full access to fly from Texas to Kansas City to see Chiefs home games.

Andy Tretiak, the CMO of Airshare, said the partnership with Mahomes is “great for both sides,” as Airshare continues to use his likeness as it expands operations to cities such as Chicago.

“I think you can make the case he’s easily in the top three most marketable sports figures in the country,” Tretiak said. “And I think that’s only going to increase.”

Though rival agencies and marketing firms suggest Mahomes’ reps should be aggressive in securing long-term partnerships, Jacquelyn Dahl, the founder of 1UP Sports Marketing, said the young NFL star shouldn’t “jump the gun” on new endorsements.

“You’re going to see a lot of that with him, just the overall concept of time,” she said. “You look at guys like Kobe and his Mamba Mentality and how he went about his career. Everything he did bounces back to his Mamba Mentality whether it was on the court or off the court, just a mindset. Patrick, his mindset is around the concept of time and the fact that it’s the one thing you can’t get back.”