Business Insider: “I took a flight on a $10 million private jet, and it shows why one business case for private-plane ownership makes perfect sense.” 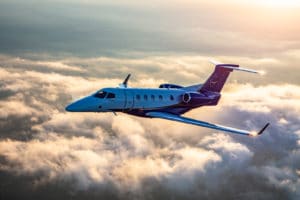 While private jets have a reputation for being extravagances — and in some cases, they certainly can be — there are actually a few more practical and down-to-earth reasons that people fly private. Especially for business.

The number one advantage is flexibility, which begets efficiency.

Say you’re a college sports recruiter, and you have to visit a bunch of high schools in the mid-west. Flying commercially, you’d need to book a flight to the closest airport with commercial service, which could be hours away from the school.

Then, you’d have to drive hours to the school in a rental car, drive back to the airport, and get the next flight to your next school. It might not be until the next morning, and even then you’ll probably have to connect in a major city like Chicago or Denver.

If you’re flying private, though, you can find a closer airport and land there. Take a quick taxi or ride to the school, then head back to the airport. Take off within 10 minutes of arriving, and fly to the next school. The visits that might have taken a week or two flying commercially can be knocked out in two days.

The same holds true for people who manage multiple franchise locations, car dealerships, or other businesses. While there are roughly 5,000 public airports in the US, only 10% of them have any commercial service, which could be as few as two flights a day.

For those with a business need to fly private, but without the funds to buy and operate a plane, there are a few options, including charter services and fractional ownership.

Fractional aircraft ownership basically means instead of owning an aircraft outright and having to manage maintenance, operations, staffing, licensing, and so on, you own a share of an aircraft which is managed by a company. After purchasing the shares, you simply pay a monthly maintenance fee, and an hourly fee when you’re onboard the plane — that covers fuel and staff. You can fly a certain number of hours each month or year based on the size of your share.

One fractional ownership company, Kansas City-based Airshare, has been aggressively expanding over the past several years, offering service to clients farther and farther away.

Airshare operates a fleet entirely of light business jets made by Brazillian company Embraer. Its Phenom 100 and Phenom 300 planes — which are among the best-selling business jets in the world — can carry up to eight passengers nearly 2,000 miles at a time.

During a stop at Teterboro Airport in New York recently, Airshare invited Business Insider to take a look at one of their newest Phenom 300s, and to take a short test flight.

As someone who — well, let’s just say, someone who isn’t used to flying in private planes, aside from a few work-related test flights, I was impressed by the incredible convenience and versatility of the jet. From take-off to landing, it was a great ride and reminded me why for some businesses, private jet flights can actually be a smart investment.

CHARTER SCHEDULING
Call us toll-free at 877.372.5136
Email: charter@flyairshare.com
CONTACT US
PROGRAMS
THE EXPERIENCE
MANAGED SERVICES
ABOUT