Focus on Safety, Service Quality and Efficiency Resonates with Those Returning to the Skies

LENEXA, Kan., September 30, 2020— Airshare, which recently celebrated its 20th Anniversary, has become one of the nation’s largest private aviation companies, offering fractional ownership, jet cards, whole aircraft management, and charter services building its business on the cornerstones of safety and unparalleled service combined with programs designed to increase efficiency and productivity for customers.

As business and leisure travelers alike return to the skies, many travelers are exploring options for fractional ownership and jet card programs as a preferable option to commercial airline travel. Airshare reports its broad range of private aviation solutions is attracting greater interest than ever from those seeking options that limit contact with large groups of people.

Airshare’s fractional programs are unique in that the company sells shares and jet cards in increments of days, not hours. Unlike competing programs, the number of hours customers can fly in a day are unlimited with Airshare (in accordance with 14-hour maximum for crew duty) based on their allocation of days.

As an example, while a 1/16th share in other programs offers 50 hours of flying time, Airshare customers typically fly well over 100 hours on the same share. Additionally, those who use the program efficiently have the opportunity to save up to 40 percent on their hourly rates with Airshare.

“We established a different model for our fractional and jet card programs for a reason,” said John Owen, President and CEO of Airshare. “Our focus is on safety, simplicity, and productivity. We don’t sell the glitz and glamour generally associated with private aviation. Our customers rely on us to increase their productivity and ensure they always get home in time for what matters most. While we are in the midst of aggressive growth for the business, that commitment we have made to our current and future customers will never change.”

Airshare was founded in Wichita, Kan. in 2000 with just a single aircraft. Following the relocation of headquarters to the Kansas City area in 2005, the company quickly expanded into Texas and acquired aircraft management company Flight Services Company in 2008. Today, Airshare serves fractional and managed customers across the entire central region of the United States, in addition to their operational facility in Buffalo, N.Y.

Last year the company announced a major expansion into the Upper Midwest, including Chicago, Milwaukee, Indianapolis, Louisville, and Cincinnati. In 2019, Airshare logged more than 12,400 flights and 16,000 flight hours.

“The goal was to enable business aircraft operators with a way to maximize the utility of their aircraft investments, while also making the most efficient use of their most valuable asset—their time,” said Taylor. “We could see that full ownership simply didn’t make financial sense for a lot of individuals and companies, and traditional fractional programs often struggled to run efficient flight operations, which increased direct costs for owners and offered little flexibility in their intraday schedules.”

Owen joined Airshare as CFO in 2016 and was named President and CEO in 2018. He said the achievements the company has experienced to date have laid the foundation for rapid growth ahead. “We have an incredible group of people across every department of the company, from our pilots, to our maintenance crews, to those who support our customers every day.”

Airshare has taken a strategic approach to growing its business, intelligently expanding its brand to connect more customers with their diverse aviation expertise, solutions, and best-in-class service.

The company is also proud of its long-standing partnership with aircraft manufacturer Embraer. Airshare became the first Part 135 operator of Embraer Phenom 100 light jet aircraft in 2009 and was the first fractional operator to take delivery of a Phenom 300 in 2010. Their maintenance facility in Wichita is also an Embraer Authorized Service Center. 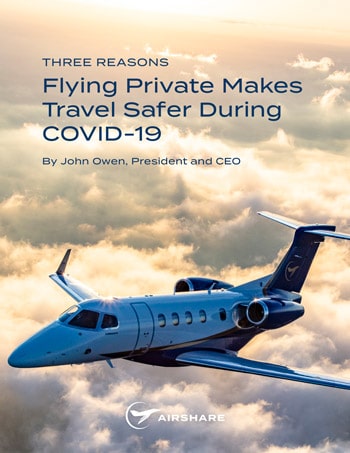